In true Islam, dependency of a Muslim’s spiritual growth and nourishment lies on his relationship with Prophet Mohammad. He understands that the source of true knowledge is Prophet Mohammad, not the Quran.

We admire the Islam in which Prophet Mohammad is the alpha and omega.

True Islam is not meant to seek guidance from the Quran.

Similitude of the Quran can be given as a brick and cement. The difference between the Quran and Islam is the same as it is between cement, brick, sand and a building.

In simple words, the Quran was raw material and with that raw material, Prophet Mohammad built the building of Islam. It is like a teacher’s manual; it is not for the students.

If the Quran was meant to be given to the Muslim Nation, it would have been compiled and given the shape of a book by the Prophet Mohammad himself, but he didn’t do it.

Umar bin Khattab explained the nature of Biddah (Innovation). There are two types of Biddah: Biddah Sahiya (bad innovation) and Biddah Hasanah (good innovation). He caused the religion of Islam to fall into the ditch of bad innovation. So the Quran is raw material with which Prophet Mohammad built the building of Islam. The source of knowledge is not the Quran.

If it is Quran, for the sake of argument, then why did Prophet Mohammad say, ‘I am the city of knowledge and Ali is the gateway to it’?

So the lesson for today is that the Quran is not the source of guidance and knowledge. 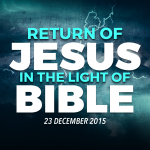 Return of Jesus in the Light of BibleArticles, Video 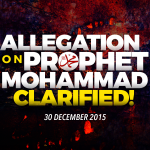 Prophet Mohammad is Not a PaedophileActivities, Video