Prophet Mohammad is Not a Paedophile

Younus AlGohar responds to rumours circulating the internet that Prophet Mohammad slept with a 6-year-old girl. 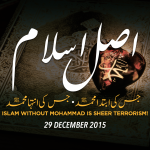