#AskYounusAlGohar: Was Hitler A Zionist?

Question: On LBC, Ken Livingston said that Hitler was a Zionist. I heard that some Jews also say. Many people say he read the Quran then killed 6 million Jews.

So he got the idea from the Quran? Come on.

Hitler did the Holocaust and it was his own perception and idea. He was a Christian; he was not a Zionist.

In Germany, even the women are well-built and tall. What he did was he collected all the tall men and all the tall women; he asked them to sleep together and produce children without marriage, so that he could have a new race. This was his idea and it did not come from the Quran.

Any Jew who becomes an extremist becomes a Zionist. You cannot say a Christian is a Zionist.

There is a bad apple in every garden and a bad fish in every pond. In a similar way, there are good and bad people in every religion.

There are bad people among Muslims, Christians and Jews but not everybody is bad. If somebody is bad, don’t think his religion is bad. Individuals can be bad; religions are not bad.

Christianity, Judaism and Islam are not bad. If some bad person is practising Islam, then that bad person is bad; not Islam. Similarly, if some Jews are bad, it doesn’t mean the religion is bad. It is about individuals.

Because the conjecture about Islam has gone bad, now people are attributing all sorts of bad things to Islam and the Quran. You need to call a spade a spade; you can’t paint anything in your own colour and say, ‘This is bad.’

How come Islam did not inspire people in the 1400 years to carry out carnage and become savages who do not let anybody live?

I’ll tell you something. According to the Jewish beliefs, God promised them the Promised Land. God is supposed to grant them the possession of that land, so [they should] leave it to God. God will do it.

If you are making efforts, promoting militancy and you are trying to take the responsibility of God in your own hands by trying to acquire that land by force, you are not Jewish. You are manipulating the words of God.

If God thought it was a very small, petty issue, he would have said, ‘Make and effort, you can do it.’ God would not be bothered to make a promise if you were capable to retain the land. God did not say that; God said, ‘I will return it to you and that is my promise.’ God does honour his promises. He doesn’t make fake, empty hollow promises.

These people who are making efforts and promoting militancy and terrorism can never be successful. The time will soon come when, on behalf of God, [Lord Ra Riaz Gohar Shahi] will fulfil the promises. 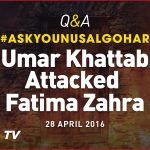 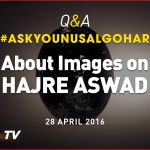