Are We All Progeny of One Adam?

His Holiness Younus AlGohar reveals important information about human history, elaborating on Darwin’s Theory of Evolution in an unprecedented way.

– Many religious people believe that all humanity is the progeny of one Adam, however Lord Ra Riaz Gohar Shahi explained that there have been 14 000 Adams. In His book, The Religion of God (Divine Love), Lord Ra Riaz puts forth an irrefutable argument to support this, which is so obvious and evident that one does not need to verify it.

– People of China, Japan, South Korea bear a good amount of resemblance to one another while the same can be said about people from Middle Eastern countries as well as South Asian countries. If you stand a Pakistani, Arab and an African in a queue and ask whether they come from the same Adam, the answer would be a resounding no. People from different Adams all have different temperaments and may differ in body shape as well.

– When Lord Ra Riaz visited Arizona, a leader of a Native American Tribe came to meet Him. Lord Ra Riaz asked him, ‘Where do you think your Adam came from?’ He replied, ‘According to our religious books, he came from the Middle East.’ This was in reference to Adam the Eminent One, mentioned in Christianity, Judaism and Islam. He then said, ‘According to our oral history and cultural books, our Adam came from the mountains of South Dakota.’ This is an anecdote supporting the fact that there have been more than one Adam who came to the world.

– Charles Darwin’s Theory of Evolution states that man evolved from apes. This is not entirely true because not all people have come from apes. When, in Moses’s era, some of his people disobeyed him, God punished them by turning them into apes. However, the women who were pregnant, though they were transformed into apes, they gave birth to human babies. As a lesson for humanity, the progeny of apes have some attributes of apes, such as their preference to drink more rather than eat. Such people can be found in Europe. Similarly, people in Africa who rejected the message of Prophet Seth were cursed by God and turned into donkeys. The pregnant women among them gave birth to human babies. 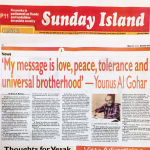 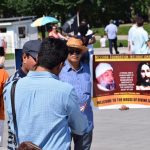